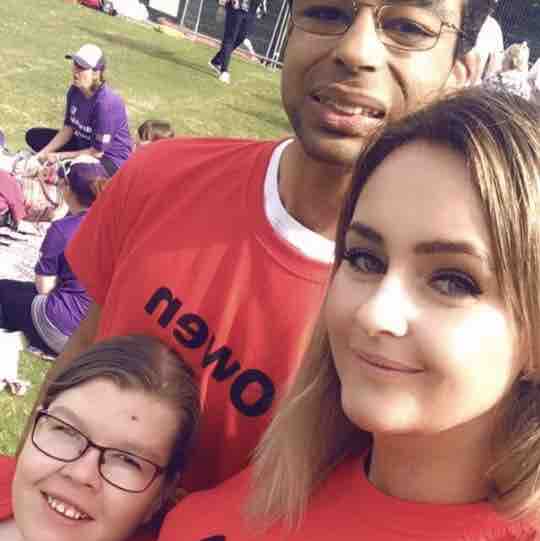 Have you been anywhere that makes you so happy that time seems to fly by in an instant and the sides of your face ache from smiling and your stomach hurts from laughing so much? I have. That place is People First Keighley & Craven. People First Keighley & Craven is a community of adults with learning disabilities coming together to work and learn life skills. It's run by Hanna Bennett who from what I've witnessed over the past few weeks is constantly on the go! Whether she's organising things, solving problems or generally doing everything, just trying her utmost to provide the best for the members of this Keighley branch. They are lucky to have her and the other staff members who are so invested in the work they do.

The home of People First Keighley & Craven is in a relatively unassuming mill, you would never know that it was there. In juxtaposition the inside is this beautiful place full of laughter, fun and kindness. From my first visit I fell in love with the People First. It was such a wonderful feeling. Hanna showed me round the premises, through main room filled with computers with a large group table in the centre of the room, to the smaller office, to the craft room and lastly into the radio station. Yes you read that correctly the members have their own radio station and if you have some time spare it's certainly worth a listen! The members interview key people across the district such as MPs, councillors, Lord Mayor's and senior staff in health and social care. They are dealing with really important issues and it's an enjoyable listen due to the unique perspective the members bring to each show.

I was admiring all the facilities on the guided tour when Hanna explained how much she welcomes our help because they have had to reduce the number of days that the members can come in, due to a lot of funding cuts. As I found out more and more about what People First Keighley & Craven actually does, the activism, the peer support and the learning holidays, to name just a few, I began to feel so sad that everything is having to be rationed to the members. As we continued on the tour I began to realise how important the member's work is. They campaign against injustice's affecting the lives of people with learning disabilities (one of their campaigns even ended up in parliament), they do work to promoting healthy living, they get involved in events around our area and assist in any way they can, plus there are always new projects going on. Currently they are focused on gardening in their allotment and their gardens around Keighley, they complete craft projects and sell them to raise funds, and they take part in local meetings to improve services for those in need in our area. I initially found out about People First Keighley & Craven through attending a Bradford Foundation Care Trust meeting, where several of the members were sharing their thoughts, ideas and experiences to the BDFCT. It was then that I knew that I wanted to get involved somehow.

Amazingly, the staff and members have worked so hard that everyone still have access to the People First Keighley & Craven service, but it's just not as much as it once was. Clearly other employees were feeling that frustration too because Sam Day who has worked for People First Keighley & Craven for just over a year and volunteered from the October before that, as a self-advocacy and development worker, has decided to try to raise some funds for the PF members, that have become so important to her.

Her words to me were, “I'll raise the money, they decide how to spend it”. I turned round to look at the members reactions and they all have massive smiles at the prospect of having some extra funds! Member Charlotte kindly said in response, “She’s a gorgeous person!” Then I was smiling!

“So what are you planning to do then to raise money,” I asked Sam, thinking it might be a bake sale or coffee morning. “Oh I'm climbing up Snowdonia” she replied. There was a stunned silence in the room. She then went on to explain that she is wanting to challenge herself, whilst also doing something big enough to encourage people to donate! Stephen B made a joke about Sam not being able to do the walk, they laughed together. But then Stephen told her she was “so nice” for doing it for them.

The 33 year old Mother of four will be climbing up the Snowdonia National Park on the 5th October 2019, walking an all round total of 8 miles, that takes you from just above sea level at 3,330 feet to 1,015 metres high! It is estimated that it takes the average person around 6 hours to complete. “So are you an avid walker then”, I asked Sam... but her funny expression said it all. The members began to laugh. This was going to be such a big challenge for a novice, but after knowing Sam for a little while and seeing what a hard worker she is, I have no doubt in my mind that she will conquer this challenge, as she does all other challenges in life. Plus she is lucky to have friends and family coming along with her for moral support. She has even started a weight loss and fitness programme to help her get ready for the big day!

I began talking to the group about Sam's amazing pledge to raise money for the group and they had plenty to say on the matter. “She's a good worker Sam, she is always willing to help people and puts her work first,” said member Matthew.

Another member, Sarah, was sure what the money should go on, “Computers and new printers” she said decidedly. Many of the other members agreed with her, “technology is very important for the members” Sam explained.

Adrian Swallow, the chairman and member of People First Keighley & Craven told me about being part of the board for Sam's job interview. He said, “She was brilliant, smiley and she made us laugh”. I've got to say I don't think this group ever stops laughing and I made that comment to Sam.

“We're always laughing and joking, but it's not always been like that for me”, Sam began. “Before I started here I was going through a hard time with depression and anxiety.” she explained. But she went on to say that things had really improved when she began volunteering at this wonderful place. “They inspired me. The way that the members face their individual challenges each and every day, it's inspiring.” The members sat round the table were moved by her words, one of them became teary eyed by the emotion of it all. “We are like a family,” she concluded as each of them expressed their agreement.

I feel so lucky to spend time with everyone at People First. It really is a privilege to be there and I felt particularly grateful to be a part of such a beautiful conversation like the one we just had. It was so special that a few days later I asked whether I could continue writing pieces like this to open a door into the joyful world of People First Keighley & Craven for everyone who are unfortunately thus far have been outside it.

If you want to help out at People First Keighley & Craven they are currently looking for plants and help with their gardening project. Plus, you can always sponsor Sam in her epic Snowdonia climb by donating through her Go Fund Me page! Click here! The members will be exceedingly thankful to all who show support and so will Hanna, Sam and the other staff & volunteers at People First, any help at all is gratefully received.